Afterwar by Lilith Saintcrow is a powerful dystopian novel about the United States seventy years in the future. The nation has been torn apart by civil war.  Ruling from Washington D.C,  President McCoombs and the America First party rule with an iron fist. Immigrants are criminals and must be forcibly sterilized.   Free speech is repressed. Patriotic displays are mandatory. Failure to show sufficient patriotism will result in punishment. For the worst elements of society, there are the Reklamation Kamps.

Fighting against the government are the Federals and the Raiders, guerilla fighters of former citizens. Freeing one Reklamation Kamp, they find most of the captured Raiders had been sent to the killing jars. But one raider had been sent to the brothel. A former medic, Lara, rejoins the Raiders in the fight. But as the war end, it is necessary to search the officials, who committed war crimes. Traumatized by her experiences, Lara might be the key to finding the worst of the criminals, a doctor who performed inhumane experiments on prisoners and children.

This is a dystopian fantasy, but there is an underlying truth to it. The reader cannot ignore the similarities to the America First’s hatred for the immigrant, the homosexual, the non-Christian, and others to the rhetoric of the current resident of the White House. Moreover, anyone with any knowledge of US history must connect the darker aspects of our history to this bleak future.  This strong connection to the present and past of the United States makes this a compelling story.  Even the descriptions of places are uncannily accurate. The City of Boise plays a role in the story and Saintcrow captures the city and its attitude perfectly.

But ultimately, Saintcrow writes an excellent, exciting story about a group of survivors of war and their struggle to find a better tomorrow. 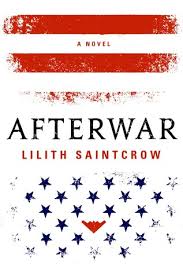